Higher inflation – and its accounting implications for company pension obligations

Higher inflation – and its accounting implications for company pension obligations

At 7.9 per cent1 year-on-year, inflation in Germany was higher in May 2022 than it had been for a long time. Even at the end of 2021, it was already at 5.3 per cent. The years ahead are also likely to see higher inflation. What will be the impact on pension provisions?

It cannot be assumed that the current increase in inflation will weaken over the year. As a result of the war in Ukraine, energy prices in particular have risen sharply, now being more than a third higher than in the same month of the previous year. Food prices, however, also increased noticeably – by more than ten per cent. The last time inflation was as high as the rate in May 2022 was during the winter of 1973/1974 in the wake of the first oil crisis. Depending on course of the war in Ukraine and the severity of the economic impact on the euro zone, higher inflation must also be assumed for the foreseeable future.

Even by 31 December 2021, higher inflation was already having a noticeable effect on pension provisions in balance sheets prepared according to HGB (German Commercial Code), US GAAP and IFRS principles. This was due to the direct impact on the choice of long-term trend assumptions regarding the dynamisation of inflation-indexed pensions.

An analysis of the assumption made by around 60 large German companies (DAX40 companies and other, mostly MDAX, companies) revealed an increase in the applied pension trends as of 31 December 2021. The mean value increased by 26 basis points year-on-year to 1.82 per cent, with both the lower and upper ends showing an increase of a similar magnitude.

For 2022 annual accounts, the applied pension trends are expected to be increased further in order to reflect yet higher inflation expectations in the trend assumptions. A pension trend averaging two per cent or higher seems realistic from today’s perspective.

An increase in the pension trend basically means an increase in pension obligations for the portfolios concerned. However, it has to be borne in mind that the affected portfolios are increasingly being reduced, as an exempting adjustment guarantee of one per cent per year (pursuant to Section 16 (3) No. 1 of the German Occupational Pensions Improvement Act (BetrAVG)) is likely to apply to new pension commitments made from 1999 onwards. In addition, lump-sum options are also increasingly being introduced for existing pension commitments and taken into account for accounting purposes.

Many pension schemes currently being applied only provide for lump-sum payments or instalment payments. Nevertheless, there are several companies that still have a number of legacy pension plans subject to an adjustment review pursuant to Section 16 (1) BetrAVG. For these obligations, an increase in the pension trend by 25 basis points, for example, means an increase in the provision of up to four per cent under IFRS principles.

The effect of a change in the pension trend is recognised directly in equity under IFRS/IAS 19. The situation is quite different under German commercial law where this effect is recognised as personnel expenses in the commercial balance sheet.

up to October 2019: derivation based on inflation-indexed bonds 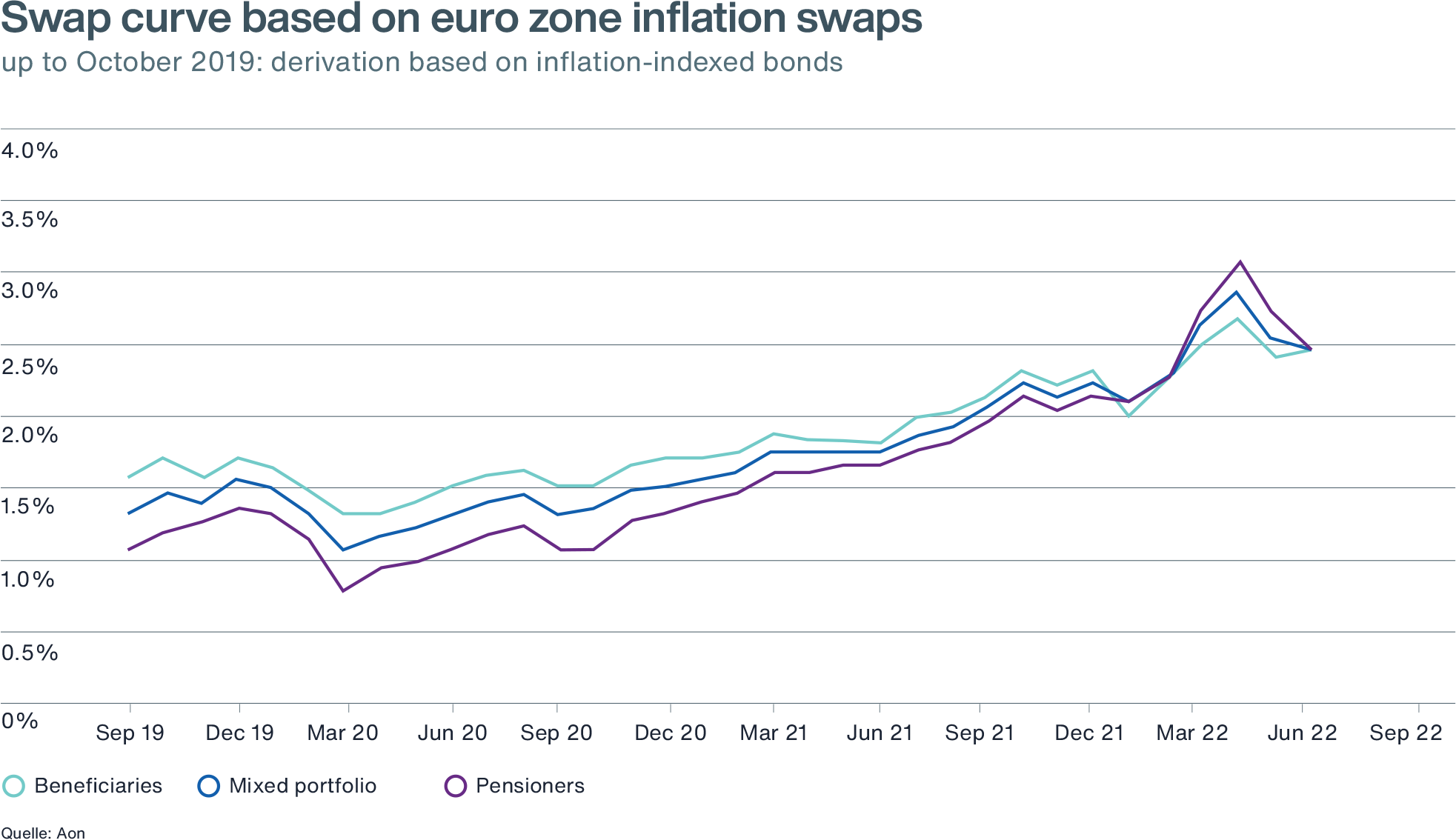 This could also have a positive effect on the pension trend being assumed, depending on the assessment of the future trend in net wages compared with the expected rate of inflation.

In principle, an increase in the salary trend can also be expected as a result of higher inflation expectations. As of 31 December 2021, no particular trend was yet evident in this assumption. However, it seems that the trend in wages and salaries needs to be reviewed for annual accounts in 2022.

The continued trend in inflation expectations in the coming months and years depends crucially on the progress of the war in Ukraine and its aftermath, which, at present, cannot be predicted. However, not least due to the risks in the energy sector, experts are expecting inflation to continue to be high in the years ahead. In particular, the latest studies by the ECB as part of its Survey of Professional Forecasters confirm that, in the short and medium term, inflation in the euro zone will stay above the long-term target of two per cent.

This is reflected in the market expectations determined by Aon on the basis of euro zone inflation swaps. In this respect, a significant decline in the inflation level and thus a decline in the pension trend to be applied to future pension agreements is not to be expected for the time being.